To navigate the Prospect Hill pages, use the menu dropdown at the top of each page

Burial permit #1 at Prospect Hill Cemetery was purchased in 1858 by Alonzo F. Salisbury, who was at one time the Douglas County representative to the Territorial Legislature. According to an old receipt found in the Douglas County files, the funeral director, A. F. Vischer, certified that Salisbury paid $25 for the coffin and the service. His widow, Lydia, certified that she paid $8 to the gravedigger, John Ryan, for his services. 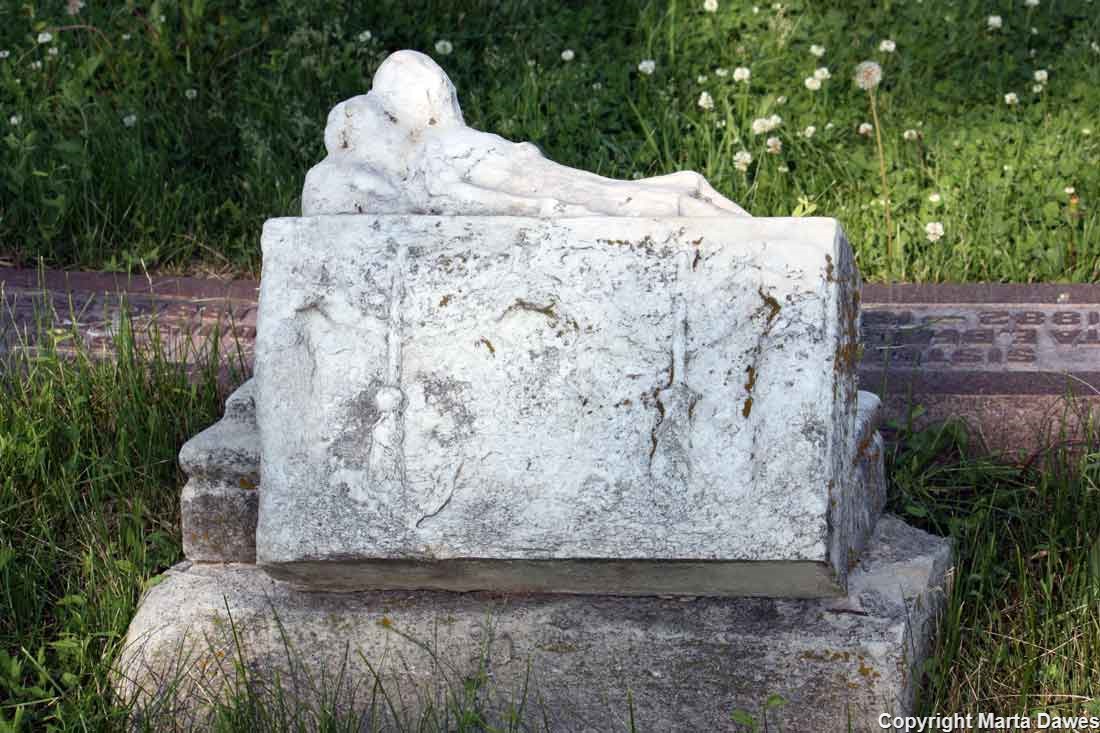 This marker is for a young child. It represents a fallen figure on a cloth-covered dias, a popular symbol for a lost loved one. You can just make out the tassels as they hang down the side, and the folds of the draperies around the top. If it had any markings on it, they are now lost.

The marker doesn't appear to be in its original spot. I believe it to be a child of the Sesemann or Hamann family, based on the plots around it. If it is, the marker was placed sometime in the mid-1880's, which was the peak decade for burials at Prospect Hill. This marker is likely approaching the 150-year mark, as of 2020.

Prospect Hill, and so many other pioneer graveyards, have hundreds of unreadable and missing gravestones. It's hard today to tell if this is a stone or cement marker. It has weathered badly.

There are approximately 12,000+ known burials in the cemetery, and undoubtedly more that were not recorded. Prospect Hill has been active ever since that first burial despite several periods of neglect and even a scandal or two. The cemetery no longer allows new burials, since it is just about full, but is open to visitors every day of the year.

As Omaha's first cemetery, it enjoys a special place in the history of our town. At about the same time that Prospect Hill was founded, Cedar Hill Cemetery, which sat adjacent to Prospect Hill, was also founded and was four times the size of Prospect Hill. This cemetery never had much success; after a few years the land was sold off and the burials relocated, until by 1890 it was out of business and the land that it sat on had been incorporated into the City of Omaha itself. Today there are businesses and homes on the land that the older cemetery occupied.

It's important to remember that Omaha originated as a settlement in approximately 1854; Lewis and Clark had been through this area not too many years before that. Burials were placed wherever an open area could be found, and there was quite a lot of open area around here then. The vast majority of these graves were not marked; there were many old pioneer graves uncovered in the early part of the last century as the downtown district was redeveloped.

Because of this, Prospect Hill represented an important step towards Omaha becoming a city in its own right. At this time, Council Bluffs, Iowa, directly across the Missouri River from Omaha, was a much bigger and more important town. The towns were to change places in the coming years, and Omaha eventually outgrew Council Bluffs. Not, I might add, without some of those early Omaha leaders resorting to some very dirty tricks.

The Rich and Infamous

If you walk through the cemetery on a sunny morning or a quiet afternoon, anyone at all familiar with Omaha will undoubtedly recognize the majority of the names on the monuments in Prospect Hill. The streets and neighborhoods in Omaha are named after the people buried in Prospect Hill; these pioneers shaped the city in its earliest days. It would have been a travesty to have lost this rich slice of history to vandals and neglect; this nearly happened until the Greater Omaha Genealogical Society, in 1976 as part of the Bi-Centennial, began to reclaim the land from waist high weeds and garbage, and the cemetery began its most recent rise from neglect.

As you'll see, 99% of the photos of the people on this site are white men. Our founding fathers never saw the need to include pictures of the women and people of color who helped build Omaha when they were publishing histories of the town; only the white men. This has made it very difficult to connect a face to the women and people of color buried in these cemeteries, and if anyone out there has any pictures they'd like to share, please let me know.

Prospect Hill Historical Marker The Prospect Hill Cemetery Foundation offers a 400-odd page book, which lists over 1400 of the burials in the cemetery, with birth and death dates plus tons of genealogical information, family and Omaha history. It’s well worth the purchase, which is also tax deductible. Please call Mike Scofield on 402-556-6057 for details.

Visit the Foundation's website to see the schedule for their annual Memorial Day observance! I’m indebted to this publication for some of the information that follows on this website, and I’d like to thank the Foundation for allowing me to share it with everyone. It’s my hope that you will want to read more about the history of Prospect Hill and the early Omahans, and purchase this informative book or make a donation to the cemetery for its upkeep. It is well worth the money.